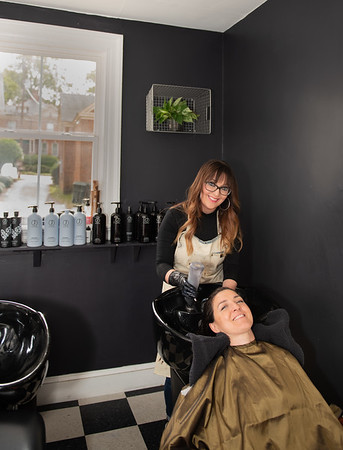 Ashley McCauley is the owner and fearless leader of Salon Veritas. You can always find her around the salon to chat, but we thought it would be fun to tell you a little about where Ashley started and how she got to where she is today.

Ashley is originally from Mebane, North Carolina. At age 25, Ashley went to Paul Mitchell the School of Louisville and graduated at the top of her class with honors in coloring and cutting. She moved to Raleigh in 2012 and received Hairdresser of the Year for North Carolina at the Rawards hosted by Raw Artists in that same year! She also produced several successful fashion shows in her first year in the city.

At the end of 2013, Ashley suffered a work injury to her left eye. For two years, doctors fought to save her eye. Meanwhile, she kept working as a booth renter and continued to follow her passion – doing hair. Ashley ended up losing her left eye in October of 2015, but that did not stop her from doing what she loves. Throughout all of this, she kept doing hair!

Finally, the opportunity arose to live her dream and own a salon in Downtown Raleigh. The signing date was one year from the exact day that she had lost her eye… Ashley knew this was a sign marking her new beginning! This is where the name Salon Veritas came from. “Veritas”, meaning “truth” in Latin, is Ashley’s truth.

Ashley has poured her heart and soul into this salon and you can feel it as soon as you walk in the door. Ashley’s passion is making Raleigh feel beautiful again. Each stylist within her salon shares that same philosophy and love for life!

Outside of the salon, Ashley loves spending time with her dog, Mr. King Louis, and enjoys exploring Downtown Raleigh with her friends.

Connect With Us on Social

We Can’t Wait to See You!

Get Information on Specials, Products, and More

Get the Latest From Salon Veritas